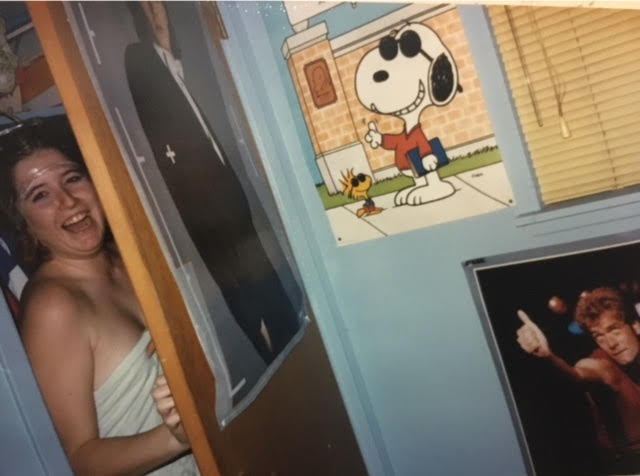 I remember being in junior high and having my very first big crush on a guy, pretty much had the hots for him all year in seventh grade. Eighth grade came and I had this great group of friends. They were this awesome little nerdy squad made up of boys and girls. My crush was one of the boys. He was tall, skinny, goofy, had a big smile and a sharp wit. We loved to talk in classes. His last name was Eckert and mine was Edward so we always sat behind each other. He’d borrow my paper and pencils, we would flirt and joke around and I loved it!!

I went to the October Halloween dance dressed as Cyndi Lauper. My mom helped me pull my hair back on one side so it looked shaved just like Ms. Lauper. We teased it up, then I sprayed the whole thing a bright orange and everyone thought that my outfit and hair were super clever. I probably took all of the credit for it myself. I’m sure it was mostly my Mom’s creative vision and doing.

But, regardless, I went to this party and I was having a great time and dancing with everyone. I felt more confident than usual and was just feeling like this boy was into me too. We were dancing a lot together and having a blast!

Looking back, it’s highly likely that he was thinking of me as a fun, crazy buddy, not actually interested in me. I just didn’t get the message.

This was not the first time, nor would it be the last time, that I was unable to read signals from the opposite sex.

There was Herbie Ing. A little Chinese guy about half my size in second grade that I thought was cute. To show my adoration, I picked him up with one hand and one foot and swung him hard in circles and then eventually let him go flying in the sky, landing in the sandy playground at Saint Anthony’s elementary school.

He got some scrapes, and I had to pound erasers at recess. He never asked me to be his lady.

My freshman year crush was an obviously gay boy. (But not so obvious to me.) I harassed that poor kid after CCD classes every Wednesday. Finally, I noticed him with his perfectly coiffed flock of seagulls hair avoiding me. It all made sense years later when I moved to Long Beach for college. Gay guys just want to be friends!!!!! That’s all!!!

So, back to my Junior high Halloween dance heartbreak.

I had one best friend Jamie, strongly remembered for the time she stole her Father’s Marlboro Reds with no filter and showed me how to smoke out on the train tracks behind her house.

Jamie was the only one who knew to what extent I was crushing on this kid. After all, she and I had been swapping crush stories and sharing our deepest secrets since seventh grade.

Then it happened. Well, I don’t remember her name… (bitch face or something).  Everyone knew she was a hussy at school, very advanced, she actually had boobs, she was tall and blond.

Aforementioned hussy ended up making out with my crush in the middle of the dance floor where everyone could see. Apparently, the teachers had to separate them.

Jamie ran out and told me what happened and I was devastated. This, at the time, was the end of the biggest fantasy I had ever had. Plus, in true keeping with the child I was, I thought everyone knew what was going on and I was totally embarrassed.

All my little nerdy girlfriends and a bunch of other ladies who wanted to get in on the drama and to witness my reaction huddled up around me and asked questions about what happened while I fronted that I didn’t even care.

When it came time for pick up, my Dad was there. Right away my Dad could tell that something was going on, we were really quiet and I might’ve been weeping a little bit. I was just exhausted from pretending that I didn’t care and I was so bummed… I wasn’t doing a great job of hiding that.

When we dropped Jamie off at her house she got out of the car, with a dramatic hug she said: “I’ll write you a note tonight!”

In my day, with no texting available, we communicated with very long, drawn-out notes that were perfectly folded origami fashion and passed to each other in the halls between classes.

Being a Dad, as Dads sometimes do, he probably was thinking something much worse had happened so he asked me the whole way home. I told him, “nothing, nothing, nothing happened” because I was so humiliated that I had a crush in the first place.

How can I explain to my Father, an adult, that my heart was broken because I liked this guy sooooo much and he didn’t like me back? That I was having new and crazy feelings and I wished it were me that had to be pulled apart at the dance?

We get home, I’m crying, Dad and Mom give each other the “parental eyes.” I make a beeline for the bathroom so I can have a good convulsive cry in private.

He must have conveyed that he thought something was really wrong. My Mom came in and she kneeled down in front of me and she had her hands on my knees. She was right in my face and she said, “babe what happened? You’ve got to tell me!”

I told her no I didn’t want to tell her and I’m so embarrassed because I felt like such a fool, I couldn’t even hold my head up.

Do you remember when you’re a kid, the whole growing up process seems so big and vast and unknown and you feel like you are the only one who’s ever gone through all that?

That your parents must have never had a crush, first kiss, or a humiliating heartbreak. They would never understand me or my particular brand of geeky loser-ness.

But they knew… they knew all my moves. They went through it too! Just like I know what my kids are going through. Adolescence is a rocky road.

I ended up coming clean with my Mom after much drama and crying. I finally told her, sobbing in the bathroom, that my crush had kissed someone else and I guess he didn’t like me after all.

I remember her taking this exaggerated breath of relief and letting it out, almost laughing in relief that the only thing that happened to me was that my eighth-grade heart was broken.

She gave me a hug and comforted me. I never understood what the laugh was about until a few years later.

I realized how terrifying that would be to have an eighth-grade girl come home in tears when you haven’t been around her and the first thought would be that she was dragged into the bushes.

I don’t remember much else about that time, but this guy and I sat near each other in our classes still. Monday, after the “kissing episode,” was awkward, but I pressed on. I pretended I didn’t care. After a while, I really didn’t. Pretty soon he and I went back to being cool again.

Time in my youth moved quickly. I had so many other great things happen that year! I made lots of friends, got my first perm, helped to create an awesome yearbook, discovered lee press on Nails… I loved that age. It was the mid-eighties. I was starting to get into fashion, rocking a blazer, fedora and stirrup pants! I cut my hair into a bob.

I never did get that first kiss in junior high. I thought I would never get kissed. But then a cute boy at a Huey Lewis concert mauled me in the crowd and I thought I had died and gone to heaven!

I see my kids doing the same stuff. Even the press on Nails.

They are insecure, adorable, sweet and lovely. They think we don’t have a clue. They think we’ve never been through what they are going through.

Long ago we had junior high stories!

I hope all my kids all have a great story to share one day!