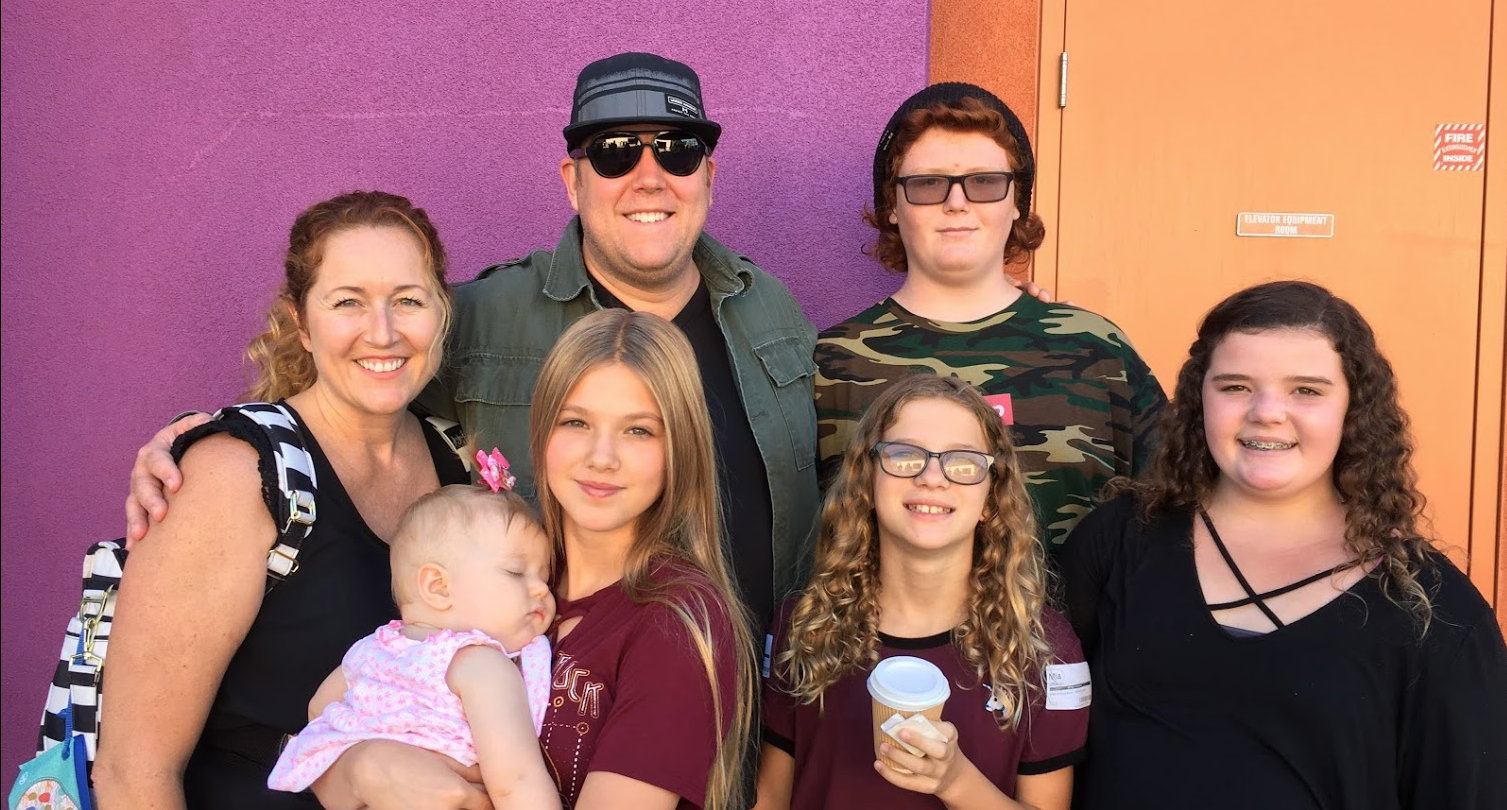 I really struggle a lot to be a good Mom. I guess most Moms do. It’s damn hard. My Momming job is unique in that I have three biological children, one adopted child, and one stepchild. They all have these massive wounds. But I do my best to raise them all in a fair and balanced way, unique to each of their individual strengths and weaknesses.

My first two grew up with a traditional Mom and Dad in the house. I hid a lot of the problems that I had with their father. It wasn’t an easy marriage, ever. But I was no quitter, so I pressed on and did about 90% of life alone with the kids. For Cooper and Scarlet, it was a shocking divorce because they thought that our marriage was the norm. Once we finally got around to divorcing it was drawn out so long. They were put in the middle too many times.

Aaralyn watched her Mothers’ health decline until eventually, she passed away when she was only nine. She doesn’t remember a time that her Mom was able to walk.

Mia was removed from the care of her birth mom and eventually was taken away from her. She lived in and out of foster care.

Lincoln is our little baby girl and is a happy, bouncy, busy nine-month-old.

That’s five of them in the house. We also have three adult kids who were Thomas’ step kids. He has been with those three nearly all their lives. So that’s eight kids total. When we all started living together, about two years ago, it was just four of them. It’s like putting bears, lions, flamingos and angry skunks in the same cage.

So how did I end up re-married to the love of my life with 8 kids in my heart and five children in my home?

It’s an amazing story and I’ve lived through it all… I’m still processing it myself. I guess that’s what all this writing is about… I’m faithful enough to know that God has a plan, smart enough to realize that I’ve got a lot of work cut out for me, humble enough to see I’ve got a lot of growing to do. The best years are ahead of us, I love my life and I’m excited about the future!

Cooper is our 15-year-old. He’s wildly intelligent, witty and charming – when he finds it in his heart to do so. He loathes schoolwork but excels at socializing. He’s the apple of my eye, my first born child, and only son.

My new husband Thomas has made several comments about my love for Cooper. It is a deep adoration… and I do just swoon over him. But he can be a little shit sometimes too.

His classic move is to drop laundry on the day he leaves to go stay a couple days with his dad. He knows that this means I either let his laundry sour while he’s gone or I just do it myself so that the laundry machine is free for me to use the rest the week. Not a fan.

He also bends the truth on the regular and sometimes it takes a near act of God to get him to tell the whole story.

My next babe was Scarlet, she just turned 12. She’s my second born and for nine years was my “tribal baby.” I always called her tribal because she’s happiest with her tribe around her. Scarlet and Cooper were my only two children until their father, my ex-husband and I decided to adopt. So that literally puts Scarlet raised as youngest for the first eight years of her life.

Scarlet is all things boss lady. A leader, a doer, who doesn’t care to sit still. She doesn’t like to be alone and is almost adult-like in her ability to help with my “Mom tasks.” She’s always so loving to me but finds herself pissed at me sometimes because I cuss. She has high standards for me and doesn’t appreciate my lack of perfection. I love to spend my time with her because she loves to be with me too. She’s interesting and funny and a talented singer and musician. She’s a social butterfly who’s searching for her fluttering pals.

The next one to come into my life was Mia. Mia was living in the foster care system and was at the end of the process of having her birth Mother permanently removed from her life. When I got the call about Mia we were camping with our church life group. My first thought honestly was that I knew my marriage was probably over and it wasn’t a good time to adopt. I told my then-husband about her. He knew our time was up and was looking for a reason to keep me putting up with his junk. He said he thought she was “just what we needed.” He said why don’t we just meet her? Of course, when I did, I fell in love with her huge smile, coke-bottle glasses (that made her already huge eyes stand out even more) and blond, bouncy curls. There was no turning back and I’ll never let her go.

Mia is unique and beautiful and bright and wonderful and I can’t imagine my life without her.

She is one of the sweetest humans in the whole-wide-world… always looking to make someone else’s life easier. She constantly gets the short end of the stick in our home because she doesn’t argue. With five children, the easiest kid to deal with sometimes gets the shitty end of the stick. Sometimes because one of the other kids will argue louder, Mia will just give up and give in and she ends up losing out.

Just last night I came home from work and my husband told me that three of the big kids were hardly any help at all and “Mia, of course, did the majority of the work.”

But just because you legally adopt someone does not mean that love comes immediately or easily. Because I did not have Mia since she was a baby there are eight years of bad habits that we live with on a daily basis. Just the other day there was something reeking in her room. I had to have her go up and do a sniff test on all of her shoes. We ended up doing a huge load of laundry and cleaning all of the shoes because they stunk. She also divulged that she wears her socks sometimes three or four times and that’s why they stink so much. That isn’t the first time. Hygiene is an ongoing conversation.

Yesterday she wrote sentences because for the third time in a row she was caught sneaking on her computer.

She chews with her mouth open and we’ve been working on that with her for a long time and she drives my husband crazy because she will take a piece of food and sit and eat it in 100 bites.

She hates to brush her curly hair and will throw a hat over it and tries to lie, saying she brushed it.

Aaralyn, 12, is the second oldest living in the house. She is 12 but she was the fourth one to come into my life. I met her right after her Mother passed away in February of 2015. She was an easy fit to hang out with my girls. She would often tag along with us to skate parties or swim parties and she’s probably one of the reasons that her father and I ended up forming such a strong bond.

He was a newly single Dad and needed help getting her out of the house while he worked and I was a Mom on the go. I was totally embarrassed to admit it, but I was forming a huge crush on her super cute father, so I was always was glad to pick her up because I got to see him too. My close girlfriends could read me like a book.

I loved having Aaralyn because she was shy and sweet and it was fun to watch her become more and more social every time we hung out. I was always shocked at the wide variety of foods she would eat in mass quantity. She’s physically gorgeous and looks like she is Giselle’s long-lost daughter.

She’s very bright and articulate and was raised totally differently than I raise kids in my household. We butt heads occasionally, as you can imagine, but what I see most distinctly about her is an ability to grow and change. She morphed from a shy child who couldn’t tie her own shoes into a strong unique, stylish young lady who is gaining a strong sense of self. She’s stretching and growing and it’s so amazing to see.

I also struggle greatly with stepparenting her. She can be disrespectful and rude, especially to her father, and I have a hard time watching that. I’m learning to keep my mouth shut and let him take care of it. She also was raised basically as an only child and has a very difficult time with sharing.

When you were raising your own child from birth it’s much different than stepping in with a kid who is 10 years old. The whole thing is a tightrope walker for sure. We struggle along and have good and bad days but I love her, I really do. I am so impressed that she has come so far in the last 2½ years that I’ve known her.

We have a new baby girl Lincoln. We named her Lincoln as she is our only biological child together and she literally “links” us all together. She is squishy and chubby and warm and loves to hug and kiss and just learned to clap her hands. When she is in the room we have a wonderful time and its a very bonding experience for our blended family.

All of us now have something so pure and joyful in common. She literally is the light and bright in the household. She’s the little thing that everybody runs to first when they get home. In the morning we usually have a bed full of kids that have come in to say good morning to the baby. And when she is 13 and a brat, she will have lots of older siblings in their 20s and 30s to spend the night with!