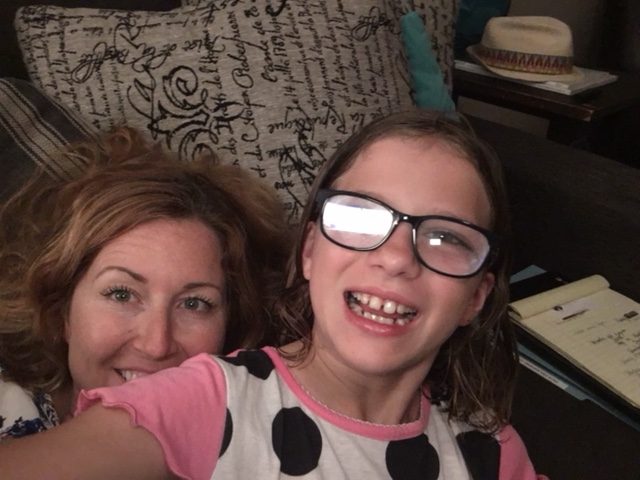 Two weeks ago I was having a really challenging time with the behaviors of the kids… just in general, I felt like I was THE GENERAL!

Like I had to be the “heavy” because they were taking advantage of Thomas and talking back to him and not listening to the things that he would tell them to do. I get into the habit of jumping in and regulating the situation.

I’m usually the one that makes sure they get their laundry done properly, do their chores, eat well-balanced meals (I swear I try) and speak kindly to each other. I pay attention to whether they are making eye contact and saying hello when they walk into someone’s home. I remind them to introduce their friends. It’s not that I am Miss Manners but in some ways, the kids are playing catch-up and learning different social cues. It’s really important to me that my children get exposed to as much positive behavior, and strong guidance, as possible. I’m sorry, but it’s a big freaking exhaustive job. I get pooped.

I was feeling really frustrated, and so I explained to my guy that it would really let me be a lighter, sweeter Mom that could be softer and kinder… if he could be the heavy more often. I told him I felt it is really time for him to shift his parenting style to a more firm Father.

You see, purposely, from the beginning he’s been the kindness we all needed. He’s the funny, the lightness and the distraction from some tough stuff we were all going through. Somedays you just need some love and comic relief and that’s our Daddy’s specialty.

As you all have read, Thomas and I did not have the traditional start to parenting and so we take a very untraditional approach to raising our blended family.

We’ve talked, and between a tumultuous divorce, losing a Mommy to an illness, and losing a Mom to substance-abuse, we feel like the kids have had enough tough stuff over the last 2 ½ years. The whole group of them really deserves some softness, warmth, and tenderness and that’s what we try to build in our home.

Well, in theory, we want to be all kindness and light. However, they are kids, irresponsible and forgetful. Sometimes I’m pissed because I’ve asked five times to get the wet towels off the bedroom floor, turn off the bedroom lights and not to leave the rollerblades outside where I trip over them at night. The day to day gets in the way of the “kind mommy” I’d like to be.

One day Thomas was coming out of our bedroom and he was buckling up his belt, stringing it through his jeans belt loops and Mia came out of her bedroom at the other end of the hall and stopped in her tracks and just stared at him – frozen.

She is tall, gorgeous, all legs and about 80 pounds. She has the thickest blonde, bouncy curls and also the thickest Coke-bottle glasses. Sometimes at the right angle, you cannot even see her eyes because of how thick her glasses are.

She said to Thomas, “what are you doing?” And he said, “I’m putting on my belt.” She said, “are you going to hit me with that belt?”

Of course, he gave her a hug and told her that he would never hurt her, at all, with anything. I think that in her heart she knew that. She has never been hit in this household, and never will. The old wounds take a long time to heal. As parents, we are very sensitive to that. That makes normal punishments tricky.

So when you adopt a kid out of foster care you know that they have been through some dicey shit. They give you a report on what she’s been exposed to in her life. I know she’s had bones broken and she has been neglected and abandoned. She’s slept in the park, she’s been off and on with a birth mother with a substance abuse issues and all the ramifications of that.

But what we count on was how wonderfully resilient children can be. Honestly, sometimes I forget about Mia‘s travels and she will randomly surprise me with a story out of the blue.

We were in driving to dinner at the mall, and there’s a big sign there at the shopping center. It almost looks like a big Vegas sign. It’s a super busy intersection and we were paused at the light. Mia recognized it and she said she used to stand on this corner with her Mom and ask people for money.  She commented that there is a park around the corner where they would sleep. And when sleeping at the park, her feet would be bitten raw by mosquitoes making it hard for her to walk or stand. Thomas and I just stared at each other in wild-eyed amazement, our jaws wanting to hit the floor. What journeys this child has taken in her young life.

Even so, she’s a normal kid with normal desires. Things like more time on her computer or ordering a toy from Amazon. She cried the other night when she over carved her Halloween pumpkin and it collapsed.

All of our kids have different behavioral issues. I don’t spend a lot of time comparing my kids to other people’s kids because our situation is so grandly different than anybody else I know. I don’t put the same expectations. I just feel like I would be setting up my kids to fail at everything, every day. They don’t have even remotely the same life experience as the majority of the kids in their school.

Because of all of the different ways that the kids have come together, it has really paid off for Thomas to be very gentle with his words and actions with all of them. All that these kids have gone through over the last few years, it doesn’t make sense to come and heavy-handed. Plus that is not really who Thomas is.

He’s funny, he’s that Dad who always finds a way to strike up a wrestling tickle fight with someone and generally has the whole clan giggling. He’s the one that will put on a mask and prank the kids or me. :/

But at the same time, somebody has to put their foot down when the kids are not taking care of their business. A home with seven people in it can get very out of hand and runs more smoothly if there is respect.

So I told Thomas this much. I told him I needed him to step up and squelch it when one of our kids is being snotty to me. I needed him to protect me with the kids when it calls for it and take some of the burdens of disciplining them off of my shoulders.

Conversely, I am learning to shut my pie hole and wait for him to give his own brand of discipline.

Last week he told Aaralyn that he was pulling her weekday social privileges because her grades were slipping.

Well, that’s a very easy thing to say, but we have a social girl (nearly 13) who has a lot of friends and many opportunities to hang out. She did not fall into this category two years ago. She was shy and quiet and would have preferred to sit and stare at her computer than hang with buddies.

But interestingly, being social is now her main focus. It’s a beautiful change!!
This was incentive enough, she has been able to pull her grades up and we’re seeing things really improving.

It’s hard though, it takes consistency because there’s always a special event and it’s very difficult to constantly say no during the week.

That’s what kids need, consistency and knowing that there are rewards and ramifications for their behavior.

He is such a sweet guy. There isn’t much that can happen that would chip his armor in the eyes of these adoring kiddos. All of the kids think the world of him and all of them gravitate towards him. It only makes sense that he can get away with enforcing more of the rules around here.

It has been a big shift because I feel like I can relax a little more knowing that he’s going to come in with a heavier hand and make sure that shit takes gets taken care of. I’m just not the kind of person that can sit back and watch kids blatantly misbehave. It really means a lot to me that they grow up with the skills to be productive members of society. Kind people, good people.

He just commented last night he’s really enjoyed seeing me more relaxed. I know the reason that I am is that I’m not the only one who is enforcing rules around here. He really steps into a role that lets me be more like the Mommy I want to be.