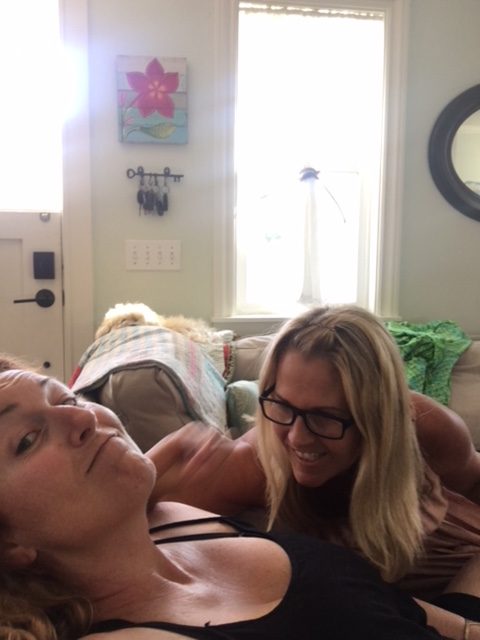 When I was first was married (and 26) my mother-in-law told me that I should never let go of my girlfriends. She said that I would need them to get through ups and downs in my life and hard times in my marriage. I had no idea how right she was!

I had lived in Huntington Beach since I was 21 and first married when I was 26, so I had five years worth of pretty decent girlfriends. And unfortunately, living in Georgia, I did not do a good job of keeping in touch with them. We didn’t have Facebook or anything. And with the time difference, it was just difficult to keep in touch.

When my mother-in-law said that, I was not too concerned because I had just gotten done having a huge gala-ball style wedding on the Queen Mary that my parents paid way too much money for and I was married to this really sweet, funny, chubby guy.

Little did I know that I didn’t know him at all. And I never would have imagined what I would go through in Georgia.

The first sign was something was wrong was that he didn’t want to have sex with me and didn’t seem attracted to me. I thought he was nervous but after about six months I realized that there was something horribly wrong.

Things continued to go basically south and I won’t bore you with the details, but needless to say, it was ALWAYS a hard marriage. I took a lot of shit off that motherfucker!

So because I did not have any girlfriends there to talk to that I trusted, I just kept everything to myself. It was so sad. I was embarrassed by my life and my marriage so I literally didn’t tell a soul.

That time was the loneliest time of my life.

I would say my divorce was an equally horrible time because of what it put my kids through, and how terrified I was for my safety and my kids’ safety… and my living arrangements, my financial future were all in jeopardy.

But the worst time in my life was definitely the first year in Georgia when I felt like I was friendless.

I guess what I’m trying to say is that it’s important to surround yourself with a group of friends you feel like you can be open with and trust.

I would have curled up in a ball and died when I left my first husband if it weren’t for my ladies. Some days were so hard I thought I was never going to make it through.

But I did! I made it out of that storm.

Sometimes you just need an ear to listen and not judge. Sometimes, you need to hear other peoples crazy shit to make you feel like you aren’t the only one.