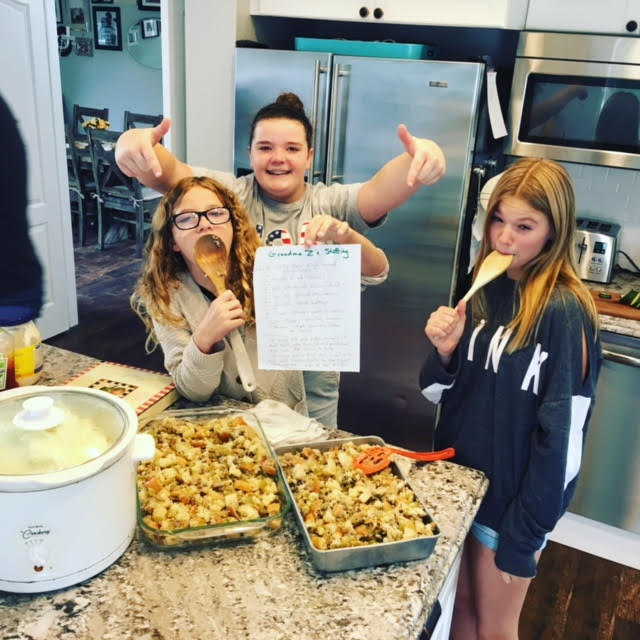 Today we had one daughter who got in business that was not hers. I figured that would be the issue of the day, but, then the ten-year-old is apparently ditching choir and the third is pilfering clothing and lying.

So my morning started with a handsome guy bringing me coffee. (Yay)

Went downhill from there.

I usually go for my Zen while I nurse my beautiful baby and have Mr. Handsome deliver me coffee in bed. Lots of times I don’t exit the bed because of the baby. I’m treated like a queen in the morning!

I really soak it up because you never know what the day is going to hold, so that could be the high point!

Directly after coffee, I was greeted by a young lady who was very concerned about stuff that was not her business.

(First thought, I don’t give a shit) Anyway… She was very adamant that they were Mia’s “for sure Mom!”

Moms comment? Moms comment was that it wasn’t really isn’t any of her business and to stay out of it.

About this time Aaralyn came into the room to give me a hug goodbye before leaving for school. I asked her who’s shorts she was wearing. She insisted they were her friend’s and if I didn’t believe her I could even ask her friend. (They swap clothes all the time.)

Welllll… automatically my BS radar is going off with vigor because the shorts were way too snug. Mia is smaller than Aaralyn. On top of that, Aaralyn is sooo defensive. But I give everyone a hug goodbye and send them out the door.

After all, at this point, my coffee is cooling and I haven’t even had a sip of it. I really don’t give a rat’s ass who or what she’s wearing. At least she’s wearing clothes and I just want them to get out of the house to get to school on time.

Many times my parenting style is to shoo them out the door and hope that any morning problems resolve themselves by the time they get home from school. Sometimes it actually works!

After Thomas got back from dropping the kids he sat down and visited with me like he normally does for half an hour so before he starts work.

At that time he divulges that we had another bit of “girl drama” going on and that our daughter Mia who is SUPPOSEDLY going to choir Tuesdays, Wednesdays, and Thursdays (since school started six weeks ago), HAS NOT been showing up.

What?!? WHAT?!? I ditched school a lot, but I at least waited until high school.

So basically we get her up at 6:45 am and get her to school by 7:15 am so that she can go to choir. She either walks with a friend or we drive her.

Apparently, she has been using this time when she gets to school at about 7:20 am to sit on her phone for about an hour and play games.

She is ditching out on choir. Note to self: ring her neck!

Mia walks in and blurts, “You know Aaralyn is wearing my shorts???!!??”

Now Mia is the docile one. She doesn’t really give a shit about much. Scarlet is the exact opposite, every little detail is an offense even if it’s not happening to her. So Scarlet spent her valuable time on the walk home from school whipping up Mia into a full frenzy.

Scarlet and Mia walked in together through the garage like two angry Tasmanian devils and Aaralyn darted upstairs from the front door to the shower to avoid questions. This buys Aaralyn a good half hour of time.

Meanwhile, after deep interrogation, it turns out that Mia has been sitting in her school line enjoying extra time on her phone. She doesn’t want to do choir anymore but was afraid to tell us. “I just only like to play games on my phone and I like it better than singing.”

We went through the whole chat about trust and why it’s really important to communicate and how dangerous it was for her to be sitting alone at school, unsupervised.

I also explained to her what a bummer it is that her Dad was getting up and taking her to school a half an hour early three days a week. I told her that was sneaky behavior.

So that little turkey lost her electronics until further notice. I need to do some reading and research because I don’t know what the hell I should do about a fifth grader who’s already ditching.

Of course, Aaralyn is denying that they are Mia’s shorts and she is still maintaining that she got them from a friend.

Now I know she’s lying. She just has this little tell where she can’t get her breath and she whispers it a little when she lies.

I was a big fat liar face when I was a kid. Takes one to know one and all that.

I know we shouldn’t bother Dad when he’s up in his office but it’s really a fine line because I’m trying to maintain some sort of positive relationship with Aaralyn and I don’t want to “nitpick her.”

Also, from what I’ve read as a stepparent I should be letting her Dad handle the disciplining.

Plus I’m not feeling it at all. I had such a nice day and one of my girlfriends came over and hung out with the baby.

For one whole day, I just did not want to deal with preteen bullshit.

So Dad comes down and after about 20 minutes. We get it out of her that she is lying. She’s super snotty about it.

She admits it but acts like it is someone else’s fault. She starts turning the story around and blaming everyone else and deflecting what she’s done on to Scarlet and onto her Dad.

So I finally get up and leave the room because I don’t want to say something that I shouldn’t and I’m really putting a lot of thought into what my role as a stepparent is.

He determined that he wants her to write sentences and to apologize.

Aaralyn agreed that was true.

I’m not sure that any of them learned anything that day, and if you think this story is ending with some rad parenting advice, it’s not. I’m stumped 99% of the time.

The two girls did agree though that they are going to start swapping clothes. We will see if that’s going to be another mess… 😉